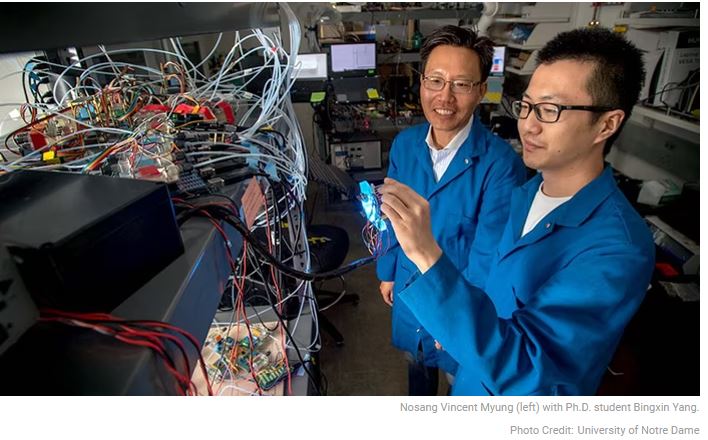 Did you know the human nose has an estimated 400 scent receptors and can distinguish millions of different smells? Trying to replicate this seems almost unfathomable, but one engineer is finding a way to benefit the environment, law enforcement, and even the military.

Through a grant from the National Science Foundation’s Center for Bioanalytical Metrology for Smart Process Analytical Technology System (phew, that was a mouthful!), “Nosang Vincent Myung, a Bernard Keating Crawford Professor of Engineering at the University of Notre Dame”, is working to duplicate the ability of the human nose through a device with sensors.

“An electronic nose can be used for a variety of applications. It can be used to detect air pollutants and greenhouse gases but also has the potential to identify cancer and bacterial infections as well as sniff out drugs and bombs. Myung stated, “developing better sensors is critical for a number of industries, the future will be shaped by our ability to design and build smart, accurate, and low-powered sensors that will have us better understand and interact with the world around us.”

At Pragmatyxs, we couldn’t agree more. Innovation continues to move us forward and one industry we see many advances in is medical devices. We will be watching for new developments with Myung’s work and may see this technology used in even more areas.