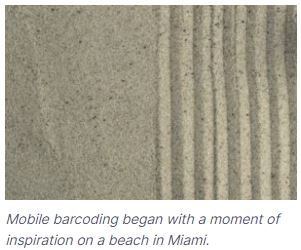 It seems that the technology of barcoding has been around for quite a while but surprisingly, barcoding is a recent invention. The idea for it came many years before the practice was put into place. The idea of barcoding was first discovered by Joe Woodland in 1948 when he “moved to Miami Beach to invent a new way for supermarkets to move people through the stores faster.” The idea came to him while dragging his hand through the sand and trying to figure out how different lines could have different meanings.

Through this identification, Woodland realized he needed a way to read these different lines and further realized he needed” a laser to scan and a computer to process” which would come about 20 years later. The barcode was first created as a circular shape but it was soon discovered that it needed to be universal to work on all product sizes. The lines in the sand on Miami Beach “ultimately became the standard for what we know today as the UPC code, although the credit for the invention goes to George Laurer since he was the one to create the actual UPC system.”

While the groceries stores were the first to adopt this technology fully, other companies came on board when they saw the benefits it could bring to managing inventory.  Today, grocery store chains, retail stores, and consumer goods manufacturers rely on barcodes to manage inventory, serve customers, take care of patients, and “revolutionize how we buy, sell, and ship” products.

Pragmatyxs is ready to support your barcoding needs and partners with some of the top companies, like RFgen, to implement the solution that best serves your organizational goals.